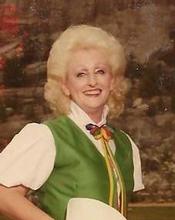 Sally Gouge, 78, of Normangee, passed away Thursday, January 5, at the St. Joseph Regional Hospital in Bryan. Services have been entrusted to Cozart Funeral Home.

Sally was the only child of Stoughton N. Bice and Sybil Simpson Bice. She was born and raised to womanhood in Montgomery, Alabama. Education was a primary focus for Sally she attended Huntington College in Montgomery where she earned her Bachelors Degree in Microbiology. She later earned her Masters Degree in Microbiology from Georgia State University.

After her marriage to Jim Samuels she relocated to the Atlanta area to work and raise her family. Sally worked in the Georgia State lab and then the Centers of Dieases Control (CDC) as a microbiologist. During her time at the CDC her reasearch was instrumental in discovering the bacteria that caused Legionnaires Disease. Upon her retirement from the CDC Sally continued her love of science by teaching Anatomy and Physiology at Dekalb College. She also began a new chapter to her career when she partnered with her new husband and research partner Jim Gouge to found Bio Computer Research Corporation which focused on bioimaging technology and machine neuroscience. Sally was CEO and named as co-inventor on a patent for image analysis used in cancer detection.

Her other passion in life was dance. Sally began dancing at the age of 3 and continued dancing throughout adulthood. As an adult she participated in competition clogging teams near the Atlanta area. She was a team clogger as well as choreographer. Sally danced until her retirement in her mid 60’s.

Sally is preceded in death by her parents. She is survived by her daughters Deborah Samuels of Bryan, TX; Laura Moresco of Houston, TX; Marza Bush of Lindale, TX; and her step daughter Honey Casey of Normangee, TX whom she lived with upon her death. She is also survived by 3 granddaughters and 3 great granddaughters.

The Sally Bice Gouge Memorial Fund has been established to provide scholarships to young women that want to pursue a career in science. In lieu of flowers the family asks that donation be made to the memorial fund and sent to P.O. Box 635, Normangee, TX 77871.