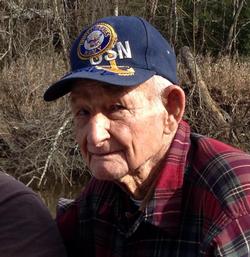 Willard Heath, 96, passed away peacefully at home Saturday, April 4, 2015. Visitation will be held Tuesday, April 7, from 6 to 8 pm at Cozart Funeral Home. Funeral services will be held Wednesday, April 8, at the First Baptist Church Flynn at 2 pm. Bro. Dee Black will preside over services. Burial will follow services at the Wealthy Cemetery.

Willard Heath was born on May 3, 1918 in Wealthy, TX. He was raised in Wealthy by his parents Ona and Ed Biddle. Willard was married to the love of his life Thelma Swallow on March 13, 1940. They were happily married for 72 years. Willard was a devoted family man, loved to garden, hunt, fish and work with cows. He never met a stranger, liked to visit old friends and share old stories. Along lifes path Willard helped many folks as he could to get a job, or a place to stay when moving to Clute. Willard worked as an iron worker for Dow for 30 years. He is also a proud member of the Masonic Lodge.

Willard was a member of the First Baptist Church Flynn. Willard always looked forward to playing dominoes with friends at the Geelan House.

Willard was preceded in death by his wife Thelma; both parents; a son Willard Thomas and a son-in-law Marvin Oliver.