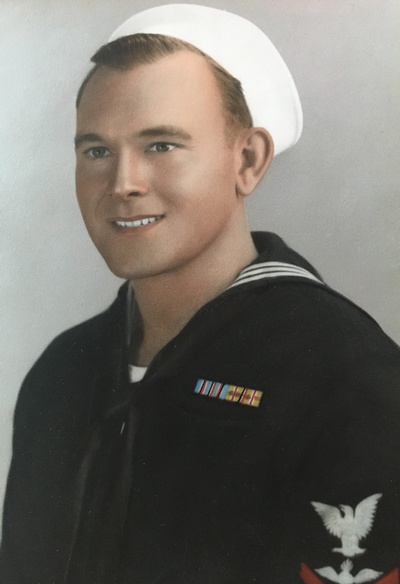 W. T. (Terris) Winn was born in Flynn, Texas on March 14, 1916. He passed peacefully from this life from natural causes in Longview, Texas on July 15, 2018. His family moved from Flynn to Normangee where his father operated a restaurant. Later, the family relocated to Houston where his father worked at the Sinclair Refinery in Pasadena. Terris was one of six children including four boys and two girls. Growing up in Houston, he attended Milby High School. Terris was quite the athlete. His chosen sport was baseball, and he was very accomplished. He was hired at age 19 by Emsco, a manufacturer of oil field equipment, so that he could work on the fabrication shop floor and play on their baseball team. He continued at Emsco, playing on their baseball and softball teams to the age of 41. He worked his way up into various plant management roles and retired at age 55.
On his way to work one day, he spotted a pretty young lady waiting for a ride. He kept seeing her day after day, and he finally stopped to talk to her. A romance ensued, and he married Sue Colvard on August 12, 1942. The night after the morning wedding he had a baseball game. He hit a home run, triple and double that night. They won the game and the newspaper called him “Little Sampson”. Three weeks later on September 3, he left for Navy boot camp. During WW II, he was an Aircraft Ordinance Mate assigned to Carrier Aircraft Service Unit 8, but he never served on a carrier. His unit served in the Solomon Islands campaign in the South Pacific. The first assignment was Guadalcanal. After the Marines took the island from the Japanese and the Seabees rebuilt the Japanese air strips, the unit serviced the planes that flew in support of the invasion of the next island. Terris serviced and loaded the machine guns and bomb bays of the aircraft. They moved from island to island as the invasion advanced. The Solomon Islands campaign was still in progress when the Japanese surrendered. He received honorable discharge from the Navy in October, 1945.
A son was born to Sue and Terris on August 26, 1949, Walter Terris (Terry) Winn, Jr. as they lived and worked in Houston. In 1959 they moved out of Houston to El Lago, southeast of Houston, close to Seabrook. Terris became very active in the El Lago community, serving as Sheriff, Tax Assessor/Collector, City Councilman, Mayor Pro-tem, and City Judge. The family stayed in El Lago during hurricane Carla so that Terris could fulfill his duties as Sheriff, and that was a frightening experience. The decade of 1960 was a very exciting time, as the Manned Spacecraft Center developed in the area, with manned flights going first into earth orbit, and ultimately to the moon. A number of the first astronauts lived in El Lago, and the place was hopping during the manned flights.
On retirement, Sue and Terris relocated to the family ranch in Normangee. Sue passed away in 2010, and Terris continued to live there raising cattle until his 99th birthday. His last three years were spent in assisted living in Longview, where Terry and his wife, Phyllis live.
He is survived by his youngest brother, Ted Winn, who lives in Venetia; Terry and Phyllis; granddaughter, Holly Carlile and husband Joddie; great grandsons, Jake and Joe Carlile; grandson Tim Winn and wife Nikki; and great granddaughters, Katelinn, Allisen, and Loren Winn.