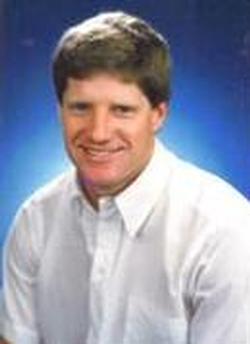 Todd, son of Delbert and Glynda Smith, was born on Feb. 28, 1965, in Houston, Texas. He grew up in Lake Jackson, Texas, lettered in track at The University of Texas, and graduated from the University of Houston. Upon graduating, he became a fourth-generation Dow Chemical employee, working in materials handling. He later worked for a transportation company in Clear Lake.

Todd was an avid skier, hunter, and fisherman. He loved all sports. He loved spending time at the familys Camp Creek lake house and at the hunting cabin in Cuero.

Todd is preceded in death by his grandparents, Clare and Edith Smith and Davis and Esther Cozart. He is survived by his parents; his sons Tyler Davis Smith and Nicholas Todd Smith; his sister Holly Hughes (Vance) and nieces Clare and Kate of Clear Lake; his uncle, George Cozart of Austin; and his special friend Annette Franco of Victoria, Texas.

In lieu of flowers, memorials may be made to Zion Lutheran Church, 514 Zion Cemetery Road, Cuero, Texas 77954 or to a charity of your choice.

Psalm 121:1-2 I will lift up mine eyes unto the hills, from whence cometh my help. My help cometh from the Lord, which made heaven and earth.