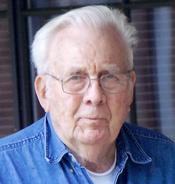 Robert Bob Ruyle was born in Medora, IL August 13, 1922 to Chester Wilson and Maye Ellen (Boker) Ruyle. He graduated high school and joined the US Coast Guard, and was active in World War II. After the war he married Elizabeth Gajevsky on September 18, 1948 and had two loving daughters. Bob worked for Houston Lighting and Power starting as a lineman and working to the Supervisors position. Robert and Elizabeth moved to the Flynn area in the mid 1980s and he became a farmer and a rancher. He watched over his cows with lots care and loved to tinker with antique cars. Gardening and farming were passions of his but nothing compared to having grandsons. He loved his family and always had time to help a friend.

Robert was preceded in death by his loving wife of almost 63 years, Elizabeth Ruyle; both of his parents Chester and Maye Ruyle; and all of his brothers.