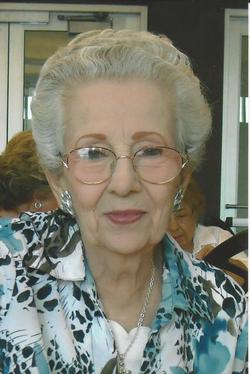 Marcia Ballew, 87, was called home on Tuesday, May 20, to be with the Lord. Funeral services will be held Saturday, May 24, at Cozart Funeral Home at 1 pm. Dr. Tony Taylor will preside over services. Burial will follow at the Hopewell Cemetery. Services have been entrusted to Cozart Funeral Home in Normangee.

Marcia Gold was born in Kerrvillle, TX March 29, 1927 to her parents Milton and Nora (Cameron) Gold. She was married to her husband Douglas Ballew October 3, 1957.

She had a genuine love for life and was a member of Beta Sigma Phi Fraternity at Hilltop Lakes. Marcia was a resident at Hilltop Lakes for 20+ years and was a Steven’s Minister. After she moved to Austin, she made friends very easily living in a 55+ apartment complex and was involved in every activity that they offered. Everyone always called her to make sure she would be coming to their next affair, whatever game or activity was coming up. She also kept in contact with a few of her Houston friends and they would come and visit her any chance they got.

She was so much an exception to the rule. She would excuse herself from all others, and always put ANYONE else first. She was an exceptional, inside and out. She was the best Mom a person could ever wish for. Always nonjudgmental, she never took any sides and always understood every side of the story.

She was preceded in death by her husband Douglas E. Ballew Sr., he passed in May of 2003; also by both of her parents Milton and Nora Gold.