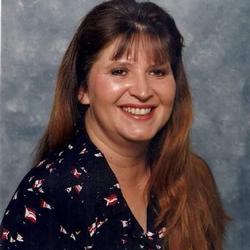 Lori Colette Snyder (Heron), 53, of Livingston, Texas, passed away on peacefully in her sleep on March 9, 2016. Graveside services will be held 1:00 PM on March 12, 2016 at Glenwood Cemetery in Groveton, Texas. Pastor Mike Miller of Oak Grove Church of Christ will be officiating. Funeral arrangements are being handled by Cozart Funeral Home of Normangee, Texas.

Lori was born on October 25, 1962 in Houston, TX to Gerald Glynn Heron and Melba Joyce Johnson. She graduated from Remington College in 2005 as Valedictorian of her class in Medical Assisting. In her spare time, Lori loved spending time with her children and grandchildren, watching Survivor and Amazing Race, or just sitting down to play a game of Scrabble. She spent her life showing an outpouring of love to animals, especially cats. Lori had a loving and generous heart which made her a friend to all.

The family wishes to thank all who cared for Lori during her last illness, especially the Palliative Care Team at St. Joseph Hospital and the staff of Hospice Brazos Valley In Patient Facility.