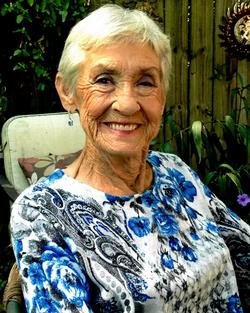 Kathryn Wynell Langford Copeland went home to be with her Lord and Savior, Jesus Christ on February 12, 2018 surrounded by her loving husband, four devoted daughters, her caring sister, and her concerned sister-in-law. The family will receive friends at Cozart Funeral Home in Normangee, TX Wednesday, February 14 from 5  8 pm. A Celebration of her life will be Thursday, February 15 at 10 am with burial to follow in Cleveland at 1:30 pm.

She was born on December 31, 1937 to Harry Glenn and Bessie Langford in League City, Texas. At the age of 7, the family moved to Tarkington where she spent her schoolyears before graduating. As a Tarkington Longhorn, she excelled at basketball, being named to the All State Basketball Team in 1955 and was the proud Majorette of the Tarkington Marching Band.

In 1957, Nell married Joe Copeland in a simple ceremony in Leon County, Texas. Soon after, their family grew when they were blessed with four beautiful daughters. Nell chose to continue her basketball career playing semi pro for the La Rose Cleaners, where she once again was chosen as an All-State Player while being a full-time mother. They raised their family first in Pasadena and soon moved to Huffman where they were active in their childrens lives. Nell held various positions with HB&T, Yellow Freight, and was a lifetime Teamsters Member.

After spending 5 years in South Dakota where she met cherished friends who she called The Girls, Nell retired to Flynn in 1998 where her family remained her focus.

She is survived by her husband of 61 years, Joe Copeland of Flynn. Daughters Lee Ann Buscemi, Gwen Bowers, Patricia Weaver (Beth) and Barbara (Linda) who all call Flynn home. Her pride and joy was being called Nanny. Grandchildren are Kathy Jo (Greg) Kindred, Tim (Liz) Weaver, Jamie (Darren) Lindsey, Lester (Kristel) Bowers Jr., Joey (Courtney) Weaver and Brian (Sarah) Buscemi. Nanny was blessed with great grandchildren who she loved unendingly: Nick, Katie, Jared, Justin, Samantha, Gauge, Truitt, Vincent, Charleigh, and Haley. Her lone surviving sister is Barbara Yarbrough from Huffman. She is also survived by Naomi Greer, SIL., and a slew of nieces and nephews of whom she adored.

Mothers prayer daily prayer was to thank the Lord for her four daughters and family, and if today was the day, dear Lord wrap me in your loving arms and take me home. She is finally home.