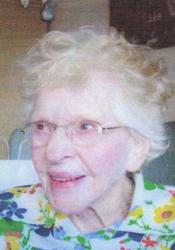 Mrs. Jim Palmer Evans, 101, formerly of Normangee went to the Lord Wednesday, May 25, in Dallas. Funeral services will be held at the Cozart Funeral Home Chapel Normangee at 2:00 PM on Saturday, May 28, 2011 , with interment following at Hopewell Cemetery. Visitation will be the two hours prior to the service at the funeral home. Pallbearers will be Jeffrey Detweiler, Michael Detweiler, Eric Detweiler, Justin Haire, Ryan Haire, David Oldfield, Jim Parsons, and Frank Closs.

In 1872 Daniel Lee Palmer, whose ancestor Thomas Palmer (accompanied by his wife and daughters) first arrived in America in 1622 at Jamestown Virginia, posted a note on the door of his home in Pittsboro, Mississippi saying he was going to Texas. Loading his family into a wagon, they wound their way to Normangee, Texas. One of the children of the family was Gaston Palmer, the father of Jim Palmer Evans.

Gaston Palmer married Willie Edna (Dilleshaw) Palmer and raised a family of 7 girls, one of whom died in infancy. Jim Palmer Evans was the middle girl of the seven, born November 10, 1909. She was raised in Normangee and attended TSCW (now TWU) in Denton, Texas and then was a school teacher in Tomball, Texas. In 1930, she left the teaching profession to marry and to begin a family. She lived at several Texas locations during the ensuing years, finally settling in Houston in 1944.

In Houston, she was a homemaker until founding the Special Services Agency, the first exclusively part-time and temporary employment agency in Texas. She became a fixture within the business community in Houston and operated the business successfully until 1954, when she sold the agency and moved to California to become a homemaker.

Eventually, she returned to Houston to be near her children, grandchildren and great-grandchildren, and she lived there until 1999, when she moved to Dallas. She attached great value to higher education and in 1999 established an Education Trust intended to provide her descendants with substantial financial assistance in getting a college education. To date, many of her great-grandchildren have received assistance from the Trust, several of which have earned college degrees. The Trust will continue to provide education benefits to her descendents, posthumously. After a long and productive life, Jim passed away on May 25th, 2011, six months after her 101st birthday.

Donations may be made to American Cancer Society in her name.