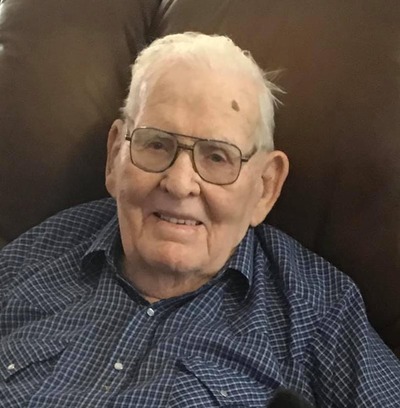 James Robert “Bob” Beamon was born into eternal life on January 12, 2021 at the age of 102. Loved far and wide by friends and family, Bob, also known as Papaw by dozens of grandchildren, greatgrandchildren, and great-great grandchildren, leaves behind a legacy of values of love and loyalty for “God, Family and Country.”

Bob was born September 15, 1918 in Eufaula, Alabama. His family moved to Texas when he was only two years old. He grew up in a rural area outside of Goliad, just west of Victoria, Texas. He ended his formal education and began working in the fields in 7th grade because his father needed help planting corn after an early freeze.

At the age of 18, Bob met the love of his life, Annie Juanita Clifton, at a neighborhood house dance. The story goes that he asked Annie her name and then said, “well, I’ll just call you Susie Q” and the name stuck. The two were inseparable and started a family that now spans six generations. Bob and Susie wed on December 13, 1937 and were married for 74 years before her death in 2012. They had five beautiful children, four sons and a daughter.

Bob was a World War II veteran, serving in the Navy doing reconnaissance in a PB4Y-2 as a patrol bomber gunner for the 106th Squadron — “The Fighting Wolverines.” Stationed in Palawan Island in the Philippines, he flew 17 missions during his time in the Navy. He was very proud of the time he spent serving his country and continued to share these heroic war stories for the rest of his life to many generations of family and friends.

A painter by trade, Bob worked for six decades in the industry, first for the company of Schlumberger in Houston, where he settled with his wife and raised his family. The family later moved to Spring. After his retirement from Schlumberger, Bob and Susie settled in the small town of Thomaston and started a very successful painting company. He and Susie enjoyed their time in this home and had many happy years living in the country on their acreage of wildflowers and giant oak trees near a winding creek filled with Indian arrowheads and the occasional Copperhead. Their home was always filled with the laughter of children. Bob worked very hard and not only provided for his own children, but, after they were grown up and moved out, he also provided a home for several foster children and a second childhood home for quite a few grandchildren. He was a role model to dozens of children and shaped more lives than can be counted. In their later years, they moved to the community of Edge (Macy Community).

Bob was an avid hunter, fisher, and skilled craftsmen. Never really being comfortable with retirement, he and Susie took a job for several years as guide and manager at the Mesquite Grove Texas Hunter’s Club and actively hunted until the age of 99. In his home shop, he created intricate canes made of Mexican persimmon tree branches, wahoo boards, magazine racks, hat racks and many other beautiful wood workings and carvings until his 100th birthday. These items were sold in craft stores and auctioned at Beamon Family reunions for more than a decade.

There will be a graveside funeral on Monday, January 18th at 11:00 a.m. at Macy Memorial Cemetery (21293 Old Bundick Road, Hearne, Texas 77859). There will also be a graveside viewing at 10:30 a.m. Flowers for the funeral can be ordered through All in Bloom Flowers in Normangee, Texas. https://www.allinbloomflowerstexas.com/.