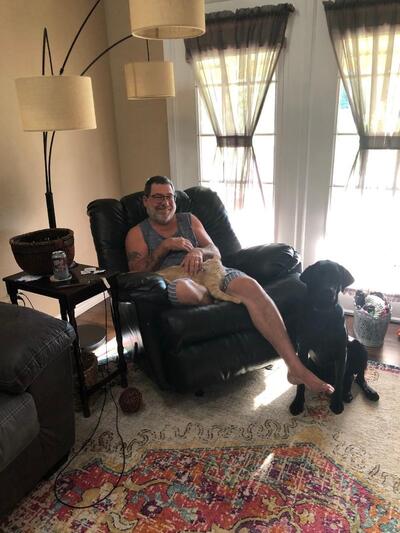 Frank Hamtak passed from this life unexpectedly May 19, 2020 at Baylor Scott and White Hospital in College Station, Texas.

Frank was born September 13, 1962 in Omaha, Nebraska to Francis Alois Hamtak and Gloria Rose Michells Hamtak. He graduated from Bryan High School in Omaha, NE and joined the United States Navy in 1980 and served his country proudly until 1993. While in the Navy he achieved the rank of Petty Officer First Class and Leading Petty Officer of the Boilers Division and was EEOW Firearm Supervisor. After leaving the Navy he excelled as an ASME Tech Specialist where he was a Team Leader responsible for managing ASME personnel. Other code specialties include ABSI, API, IBR, DOSH, KOSHA, MOM, PED. Most currently he sat as a member of various code committees for the ASME.

Frank married Amy Hamtak in 1996. They lived in Springfield, MO for 17 years and then moved to Texas in 2012.
Frank loved the outdoors, fishing, and hunting. He called it his church, where he could talk to God. He always followed the rules of hunting. Frank was also the residing President of the Hilltop Lakes Wildlife Management Team.

He is survived by his wife of 25 years Amy of Hilltop Lakes, TX. Four children, son Jeffery and wife Amanda of Omaha, NE, son Jarrod Harms of Cypress, TX, daughter Pollie and husband James Clark of Spring TX and son Frankie Hamtak of Springfield, MO. Nine grandchildren and five great grandchildren and four sisters with many nieces and nephews, along with a host of friends and relatives.