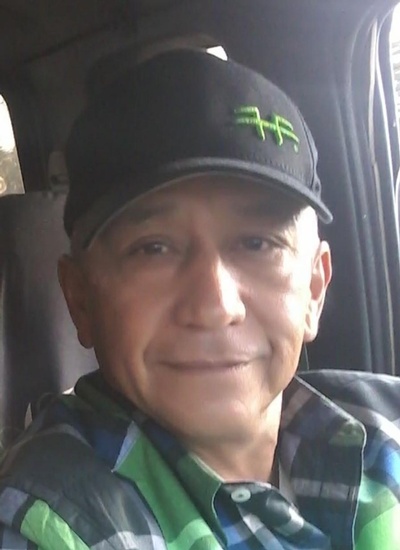 Fedrico Y. “Freddy” Aguirre, 56, of Normangee was called Home to be with the Lord on Tuesday, April 24, 2018. Freddy was born February 7, 1962 in Madisonville, Texas to the late Guillermo “Willie” Aguirre and Victoria Comacho. Throughout his life, he worked as a mechanic in the Normangee community and as a worker in the oil field. If you were looking for Freddy, he most likely would be found covered in oil, working under a vehicle, with a bandanna wrapped around his head. He was a hard worker, a jack of all trades, and was always willing to use his talents to help others where he could. He loved to joke and was always laughing, most of the time at himself. His children were his heart, he would do anything in this world for Brent, April, Kilee-jo, and Sophia.

He is preceded in death by his father Willie Aguirre and brother Joe Luis Aguirre. Freddy leaves to cherish his memories his four children, son Brent Aguirre of Normangee, and daughters April and husband Seth Gagliardi of Indiana, and Kilee-jo and Sophia Aguirre of Normangee. Also surviving him, his mother Victoria Comacho of Bryan, his brothers and their spouses, Roy and Susan Aguirre, Willie and Jimette Aguirre, and Steven Aguirre; and his five sisters and their spouses, Gloria and Eddie Casas, Lillie and Johnny Griggs, Isabel and Jamie Shaw, Mary and Gilbert Martinez, Teresa and Clinton Manning, all of Normangee. He leaves behind his most precious grandchildren Carmine, Ariel, and Zeniah Gagliardi and Madison Aguirre, many nieces and nephews, as well as the love of his life Rhonda Aguirre.