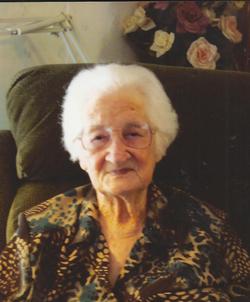 Eunice Anderson, of Normangee, was called home to choirs of angels on her 102nd birthday Saturday, July 18, 2015. Funeral services were held Tuesday, July 21, at 10 am in the First Baptist Church Flynn. Bro. Dee Black and Danny Anderson presided over services. Burial followed at 1 pm in the Earthman  Resthaven Memorial Park Cemetery Houston, TX.

Eunice was married RB Anderson on January 19, 1936. She was a loving housewife, homemaker, Mother, Grand, Great Grand, and Great- Great Grandmother. Eunice loved to cook and crochet, but most of all spending time with her family, especially all of her grandchildren.