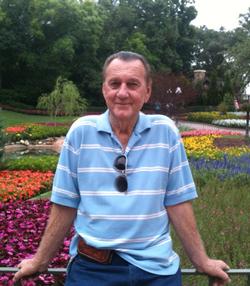 Earl Cleave Parker, 72, of Hilltop Lakes, was called home to the Lord on Tuesday, December 29, 2015. He passed peacefully at home surrounded by loved ones. Funeral services will be held Tuesday, January 5, 2015 at 1 pm in the Hilltop Lakes Chapel. Dr. Tony Taylor will preside over services. Burial and Military Honors will follow services at the Kurten Cemetery. Funeral services have been entrusted to Cozart Funeral Home in Normangee.

Earl Cleave Parker was born in Houston, TX on March 5, 1943 to his parents Earl Cleave Parker and wife Lona Mae (Tucker) Parker. He grew up in the Houston area and graduated from Sam Houston High School. He served his country proudly in the United States Navy for five years. Earl was married to the love of his life Margaret Ann Watson on June 10, 1967 at Assembly of God Church in Houston, TX. They moved to Bryan in 1970, and retired to Hilltop Lakes in 2007. He retired from Union Pacific Railroad after 31 years. Earl was a member of the Hilltop Lakes Chapel.

On any given day you might have found Earl catching fish off of his pier with his children, grandchildren, or buddies, deer hunting in his tree stand/condo, trapping wild hogs, riding on his bicycle backwards, working as a stage-hand with Troupe Over the Hill, camping with family and friends, or indulging in something sweet to eat. He loved spending time with family and had a passion for playing games like 42 and Joker. He was well known for his enjoyment of sending his opponents back to start. His idea of paradise was walking out of his back door and looking at the lake.

He is preceded in death by his parents, Earl C. and Lona Mae Parker; grandparents, Earl C. And Hettie Adelia (Evans) Parker, and Lawrence and Irva Cornelia LaBouve; and one grandson: Harrison Teofil Rakowitz.

As an expression of sympathy, memorial contributions may be sent to Hospice Brazos Valley, 502 West 26th Street, Bryan, Texas 77803.