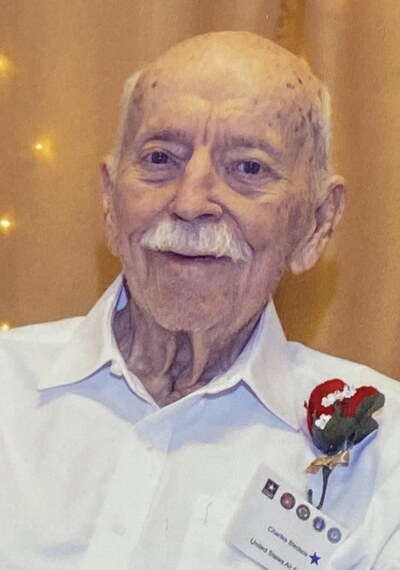 Charlie was born in Wichita Falls, Texas to A.R. Cowley and Mildred Davis Bledsoe. He was raised in Sweeney, Texas and adopted by his stepfather, Dan Alec Bledsoe. He was an only child.

Charlie attended the University of Texas at Austin and was a lifetime Longhorn Fan. Hook ’em horns! He joined the Air Force as a Captain. He trained at Ellington Field near Houston, Texas. Charlie flew F-86 Sabre Jets stateside during the Korean War.

Charlie met the love of his life, Anna Lou Miller and married her on August 24, 1957 in Las Vegas, Nevada. Charlie and Ann celebrated 62 years of marriage last August. Together they had five children, and raised them in Austin, Texas.

Upon leaving the Air Force, Charlie was employed as a Business Consultant and also as a Real Estate Broker. Charlie enjoyed spending time with his family, working on business ideas, hosting family barbecues, holiday meals and family vacations. He was dedicated to the ministry in his church, The Church of Jesus Christ of the Latter Day Saints.

Charlie passed away in his sleep in the early morning of March 23rd in Temple, Texas at the age of 89 years.

The family would like to thank the William R Courtney Texas State Veterans Home for their care and kindness to Charlie in his final years.

There will be a graveside service on Sunday, March 28th, 2021 at Ten Mile Cemetery near Madisonville, Texas at 11 am.

The funeral home is Cozart Funeral Home in Normangee, Texas.