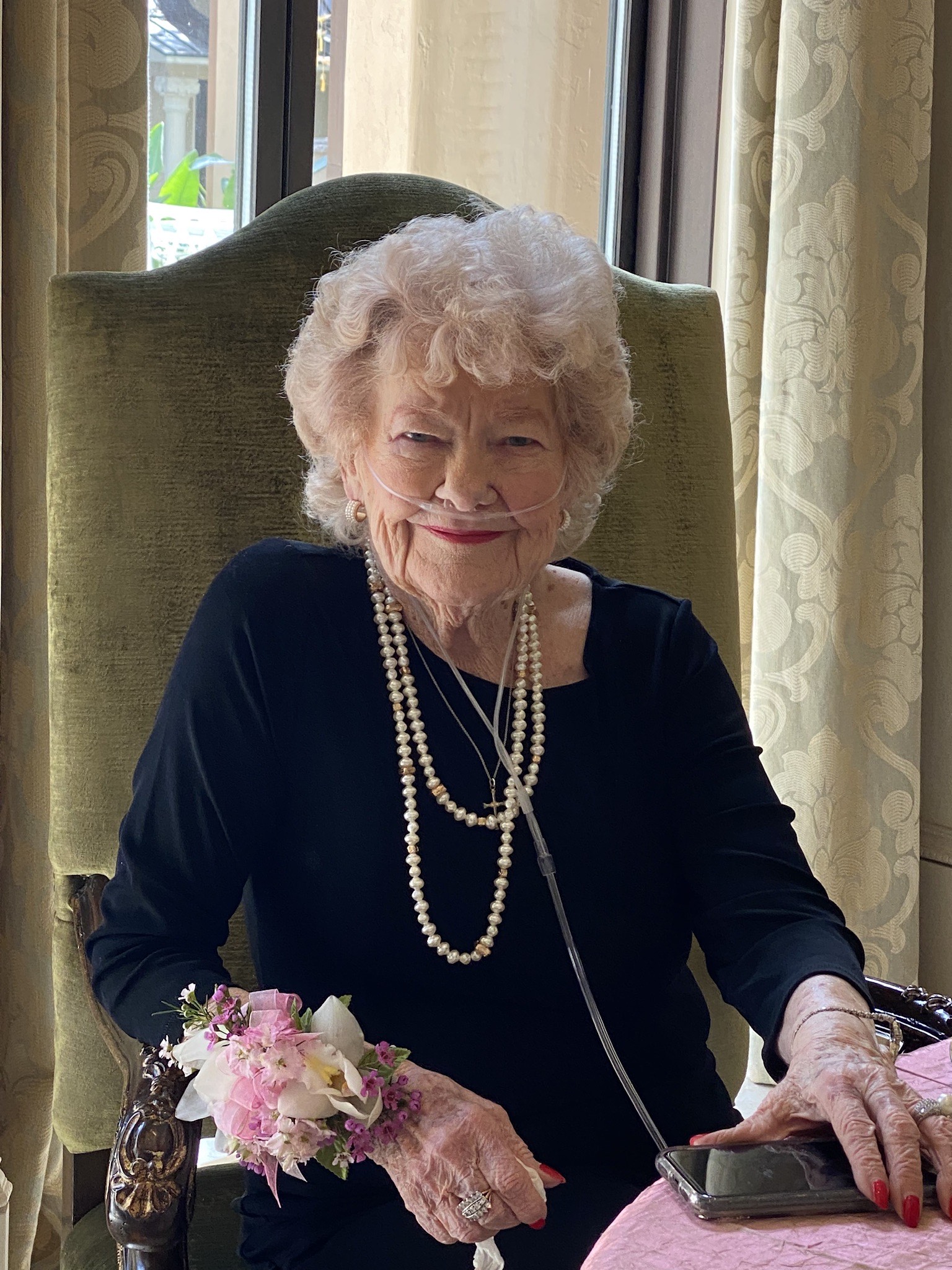 On the morning of January 25, 2022, God called home one of his faithful and loving servants, Billie Moss Bouldin.

Born September 7, 1928, in Teague Texas, Billie was the third child and only daughter of John and Vera Ophelia Dailey.  She grew up in Mexia, Texas with her four brothers Gerald, Tommy, John Raymond, and Bobby.  She started her first job at the age of fourteen working at a telephone company, and eventually became known as the “fastest Linotype operator in Texas.” Billie married the love of her life, William “Bill” Moss on November 25, 1945.  You could often hear Grandmother telling her grandchildren how Bill “Grandaddy” stole her heart at a young age, and was her very best friend.  Billie and Bill had four children, Jacky, Randy, Connie, and Mike Moss.  Billie was a devoted mother, and made a wonderful, loving home for her children.  As an involved mother to her children, when Jacky showed interest in getting his pilot’s license, Billie was supportive and got her pilot’s license as well.  Bill and Billie bought the Normangee Star newspaper in 1953, and quickly showed they both had a gift for reporting and telling stories that has kept the Normangee community informed for almost seventy years.  Bill and Billie added a real estate business to their enterprise in 1960, and operated both for many, many years.

From the words of Billie Bouldin herself, “My children, grandchildren, and great-grandchildren are my greatest legacy.”  Billie lived this belief every day of her life.  One of her greatest loves was to have the entire family together, with barely room to move, as children played and laughed throughout the house.  From the moment you entered Grandmother’s home you were met with a warm embrace, and she truly had the ability to make you feel like you were the most important person in the world.  Billie was quick-witted and loved a good joke.  When the family got together there were many fun-times, good food, and the occasional prank.  Grandmother loved spoiling her grandchildren, whether it was an ice-cream cone at Rice’s Pharmacy or a spur of the moment trip.  One year, Bill and Billie decided their granddaughters needed authentic cabbage patch dolls from Atlanta, Georgia.  They brought every granddaughter to Georgia and let them pick out their special doll.  Billie also loved fishing with her children and grandchildren.  She taught them how to fish, and that bacon makes the perfect bait for those Camp Creek perch.

Billie did not just leave a legacy in her family, she left a legacy in the entire community of Normangee, which she loved with her entire heart.  Her face lit up when friends from the community would come into the office just to visit.  When Billie was in a room she made it brighter, and after a conversation with Billie you would walk away loved, encouraged, and a little more hopeful.  Billie has been a member of the Normangee Baptist Church all of her years in Normangee.  The church was one of her greatest blessings, and often told us the best Mother’s Day present was for her to be joined in her church with as many family members as possible.  Billie was active in the Women’s ministry, and was a constant encourager to the church body and prayed diligently for those around her.  She loved reading God’s word and was quick to tell you about how a certain scripture was giving her joy and hope.

Billie had many accomplishments in her life including serving as president of the Chamber of Commerce, and being a member of the Eastern Star in which she served as a Worthy Matron.  In 2001, the Rogers Prairie Masonic Lodge presented Billie with its annual Community Builders Award in 2001, and she also received her Graduate Master Broker license in real-estate.

Billie was predeceased by her loving husband William “Bill” Moss; her two sons, Mike and Jacky Moss; her parents; her four brothers; grandson Tommy Moss; son-in-law Robert Scheigert; other relatives, and numerous friends.  As January 25th was such a sad day for Billie’s loved ones, I am sure it was such a joyous occasion as Billie was re-united with so many friends and family.

The family wants to thank friends, and the community of Normangee for being a part of Billie’s life and always encouraging and loving her well.  Although Billie will be deeply missed she is now worshipping at the feet of Jesus, and it will be a glorious day when we are all re-united again.

Visitation will begin at 2pm with the funeral service following at 3pm Sunday, January 30, 2022, at First Baptist Church in Normangee, with interment following at Hopewell Cemetery in Normangee. Services are in the care of Cozart Funeral Home in Normangee.

“Our soul waits for the LORD;

he is our help and our shield.

For our heart is glad in him,

because we trust in his holy name.

Let your steadfast love, O LORD, be upon us,

even as we hope in you.”