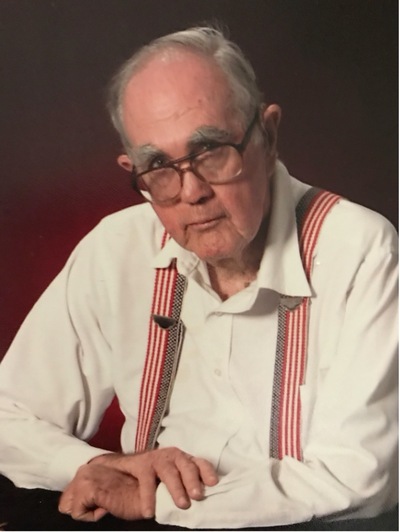 Bill was born April 11, 1930 to Corine and Raymond Jones in Friona, Texas.  He grew up on a dairy farm and learned early the “joy” of hard work.

He attended Friona Schools and graduated from Friona High School on May 15, 1948 and enrolled in Texas Tech on June 1st.  His studies at Tech were interrupted when he enlisted in the Air Force in January 1951.  During his tenure in the Air Force, he was trained as an electronics technician and served as a flight line radio mechanic and as an instructor in the Advanced Airborne Electronics School.

He returned to Tech in January of 1955 after his discharge from active service.  He graduated with a Bachelor of Science Degree in Geology in August of 1956 and enrolled in Tech’s graduate school in September of that year.  At the same time, he became a member of the faculty as a lecturer.  He taught Geology courses until he finished his Masters of Science degree in August of 1959.

He entered graduate school at the University of Texas in September of 1959 and transferred to A&M in September 1960 when he enrolled in their graduate program.  During his tenure at A&M he was employed as a Research Geophysicist in the department of Oceanography for 5 years, and as a lecturer in Geology Department for one year.  He completed his Doctor of Philosophy degree in Geology in 1968.

During his career Bill was author and co-author of several technical papers in publications of the Texas Bureau of Economic Geology, Society of Exploration Geophysics, American Association of Petroleum Geologist and Society of Professional Well Log Analysts.  In 1997 he was awarded the Frank R. Frischknecht Award by the Near Surface Geophysics Section of the SEG for his contributions and support of the near-surface geophysics community.

While Bill spent 14 years in academia, he was happiest when he was involved with business.  He was partner or principle in founding 5 different companies, Some successful, some not so much.  But it was something he loved to do.  Every day was different, everyday brought new challenges, no chance of getting bored.

In March 1966 he married Katie Lou DeBouy.  During the 47 years of their married life they lived in Deer Park, Bryan, Houston, Galveston and Normangee. He had been a resident of the Normangee area since 1975.

Bill taught high school math at Normangee High for two years and later served on the board of Trustees.

Bill and Katie organized a company in 1997 called, K D Jones Instruments, Corp. The company rented and sometimes sold, Geophysical Equipment nation and worldwide.  This was Bill and Katies legacy and is still running in Wisconsin.

Bill also had a major part in The Geelan Community House.  We all know the story of the child who tossed the starfish back into the ocean knowing that while he couldn’t save all the starfish that had washed ashore, he could ‘make a difference’ for some.  That was what Bill did.  He made a difference.  In 2012, he expressed a desire to have a place in town where, people could gather for a cup of coffee, a glass of tea, maybe play a game of dominoes, or just sit and visit with each other.  That vision, like a grain of sand which becomes a pearl, became the Geelan Community House.  A welcoming place where our local senior citizens come for fellowship, hot lunches, a friendly game of 42 and even for just a hot cup of coffee.   All of this was made possible because of Bill’s vision and his generous financial support to the Geelan House.

He was a member of Normangee United Methodist Church since 1975.  He was an active church member serving on numerous committees.  He taught an adult Sunday School Class for 32 years and was at various times a member of the choir (joyous noise section) as well as the bell choir.

Bill is proceeded in death by his parents Corine and Raymond Jones, his wife Katie, a brother Charles Jones and a nephew Bruce Jones.  He is survived by his sister Vera Ann Banner of San Antonio, 3 nephews, Stephen Jones and wife Gloria, Barry Banner and wife Julie, Danen Banner and wife Wulan and a niece Valerie Ann Muskin, and a host of relatives and friends.

Bill is being cremated and A Celebration of Life will be held at the First United Methodist Church in Normangee on May 29, 2021 at 11:00 am.

In lieu of flowers, donations should go to The Geelan Community House in Normangee, Normangee First United Methodist Church Memorial Fund, Brazos Valley Hospice or a charity of your choice.

Bill was just one man, but he made such a difference in the lives of so many.   I know Bill is rejoicing with his Lord and Savior, with his beloved Katie by his side and I know that he heard “well done, my good and faithful servant” for his life here on earth.